Jeff Hoffman, via Hubspot, recently posted about what he believes to be the three rookie cold calling mistakes that make prospects hang up. He begins by saying that getting hung up on occasionally is an unfortunate consequence of being in sales, however if they are the rule rather than the exception, then something is definitely not right.

Jeff details three cold calling mistakes that he believes need corrective action immediately including mispronouncing the name of the person or company, ignoring the prospects objections and sounding scripted. He points out that although getting hung up on is normal, you can reduce your hang up rate to zero if you avoid these common mistakes.

Babette Ten Haken wrote today about sales team differentiation strategies and how she believes they lend a fresh perspective to managing team dynamics and outcomes. She points out that most sales teams aren’t “real” teams as they compete with each other, as well as the rest of your company’s sales teams.

The post details how creating a sales differentiation strategy for sales team as a whole allows everyone to look at themselves with fresh eyes, pulling them together as you broaden their bandwidth to your customer base. Babette goes on to list five considerations when creating a sales team differentiation strategy, including build teams with collective clarity of purpose that goes beyond making their numbers and create a sales team project that has social purpose your customers can relate to.

Geoffrey James posted today about the ways in which customers can test sales representatives. He begins by saying that customers want to be certain they’re working with the right company and getting the best deal, so they test you to see if you are confident, trustworthy and offering the best price.

Geoffrey goes into detail on the five most common tests and how to respond to them, including: 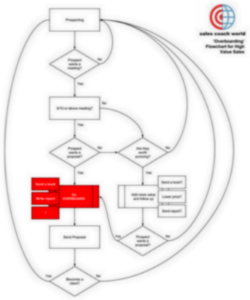